This post summarises the changes that have been implemented in version 3.0.4 of enterO.

Fix Race Entry List display when race has no classes (#67)

Races may be configured to be ‘entry only’ in which case they have no classes available and competitors simply check the ‘Enter’ checkbox when entering.

The entry race display however only displayed the competitor name in a bare list. 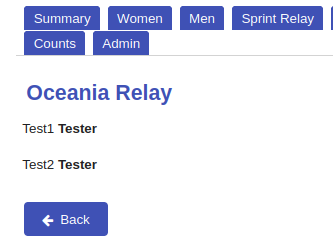 The list now displays club and is formatted to match the other entry lists.

Race fees were sorted by amount however this results in fees being displayed out of logical order when we use race groups.

The race group is now included in the sort order so in this case the Oceania fees are correctly displayed before the Epilogue fees.

A single race group is where competitors can only enter one race in a set of races (eg a rogaine where you can choose to enter either the 3 hour or the 6 hour race) however there was a restriction that all races in the single race group had to use the same classes.

That restriction has now been removed and the races may have different classes. This was implemented for the Oceania sprint relay where the elites entered M/W 20E/21E classes while the regular sprint had Red/Orange/Yellow/White classes.